It's that time of year when you can eat the entire United States, one crunchy state at a time.  Stop in for Pstars and Pstripes – a Psycho original.

The crunchy states are each coated in white chocolate, and this patriotic raised is filled with raspberry filling.

And keep an eye out for our Spam Donut – in conjunction with City Lights Theater performance of SPAMALOT.  Details coming Psoon!
Posted by Chief Psycho at 8:46 AM

Everyone knows that the first Friday in June is National Donut Day. This year, it's June 6. Every year on this esteemed holiday, Psycho Donuts rides the edge. Sometimes we even go a little over the edge.


A few years ago we launched a line of Psycho Ballz on National Donut Day, and there was a little controversy (actually, we invented that controversy, but whatever).  Ever since, our crazy line of Ballz – Piggy Ballz, Wookiee Ballz, Chocolate Salty Ballz, and more – have reinvented the meaning of 'donut holes.'

2013 was the year of the Foie Bomb – and what an explosion that was.  Sure, it was a taste explosion... what with mixing the balsamic fig gastrique and the Foie Mousse. But there was a whole different kind of explosion going on.  People fall roughly into two categories - those who lined up for our Foie Bomb when Psycho opened, and well, those who really really didn't... Donut Guy is always learning, and evolving.  And he has a new trick up his sleeve this year.

On Friday June 6, come to Psycho Donuts (early...), and try our Blood Red Velvet Zombie Pop, if you're daring enough.  They're free, while supplies last. You can't even buy one.  Time Magazine writes about them. Sal Pizarro at the Mercury News is writing about 'em, and The Examiner too!  Watch for 'em on NBC News KNTV on National Donut Day.

These 'donutrocities on a stick' are not for the faint of heart. Lettuce tell you why...

Here's the deal – we whip up some red velvet cake donuts, then mix 'em again with creamy frosting. Not very Psycho... yet.  We roll the resulting blood red concoctions into meaty ballz, and stab 'em with a popsicle stick. After the white chocolate coating hardens, our Psycho Kooks carefully add the zombie eyes and scary teeth.

Here's the crazy bit. These zombies are crawling with worms. Not those silly candy worms; we're talking about crunchy cheesy cheddar larvae – protruding from the Zombie's mouth and eyes. 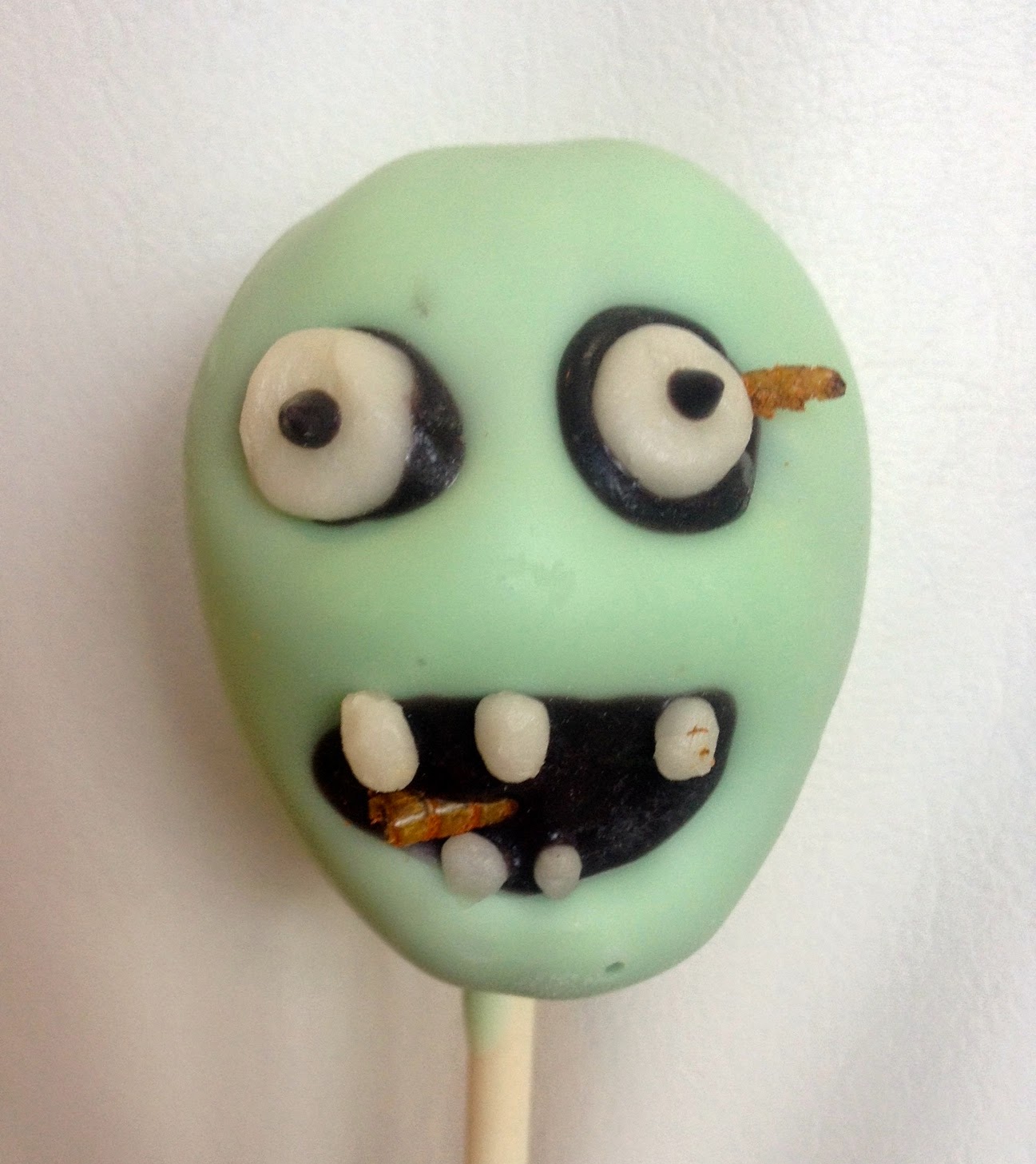 Last time we sold edible bug donuts, they were gone. Fast.  So if you want a Blood Red Velvet Zombie Pop (you know who you are), come early!  It's a lot of work harvesting those worms and Zombie facial parts, so supplies are limited (50 Zombie Pops will be given away at each Psycho location). One Zombie Pop per customer.

Blood Red Velvet Zombie Pops – free for one day only – on National Donut Day, Friday, June 6, 2014 – while supplies last.  But 'donut' forget, the early bird gets the worm. 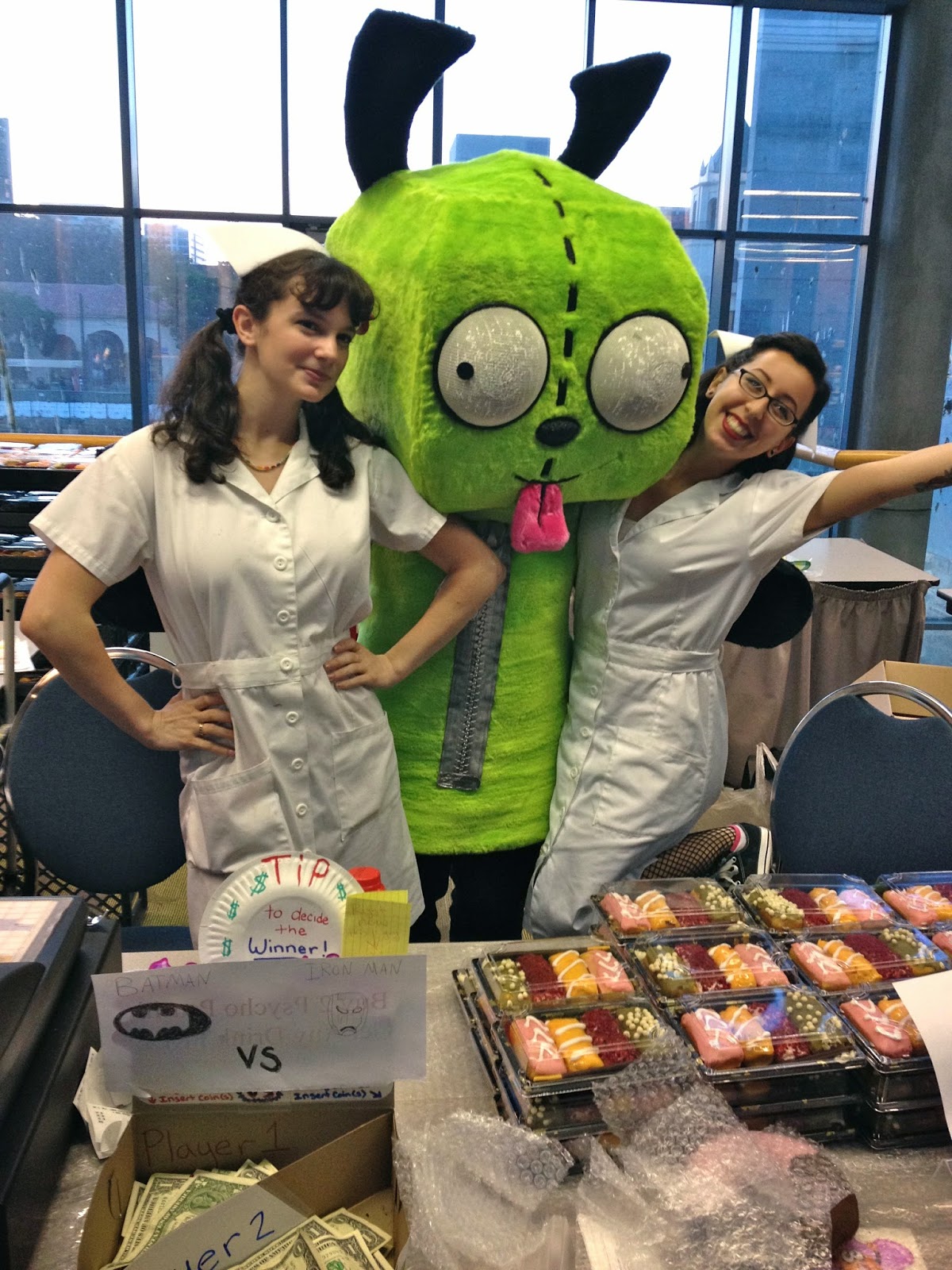 It's that time of year again, when the Psycho kitchen scrambles to keep up with the insatiable demands of Fanime-goers.  FanimeCon is Downtown San Jose's equivalent of Mardi Gras, and one of the largest Anime conventions in the country. If you've not been to Fanime, Psycho San Jose provides a great vantage point to watch all the fun; and that's because Psycho Donuts is a favorite stomping ground for Fanime lovers. 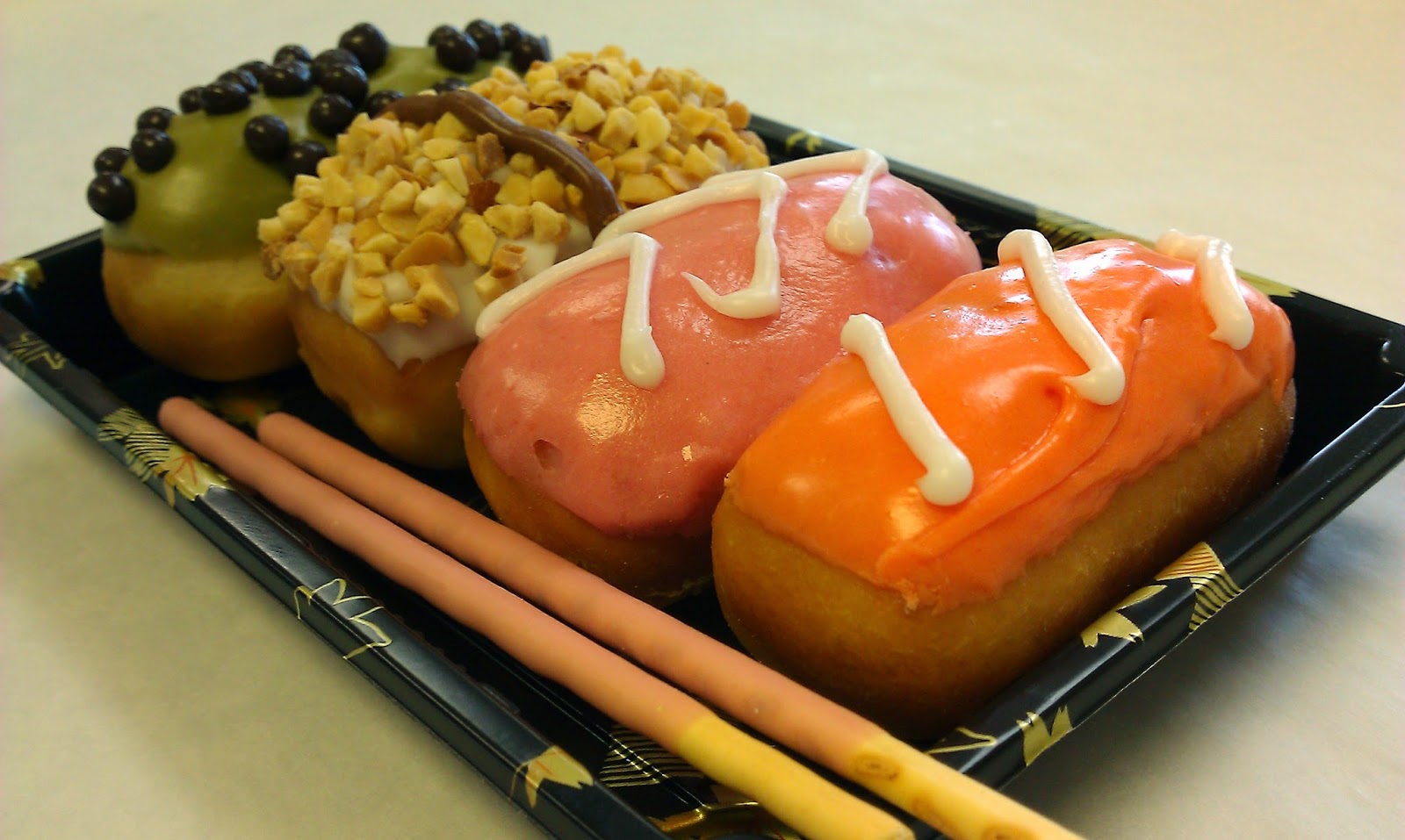 Just a couple blocks from the San Jose Convention Center, Psycho nurses and donuts will be turning Japanese, I really think so.  As always, we will be serving up Psycho Psushi – a happy bento box with fresh donut sushi and edible pocky chopsticks. 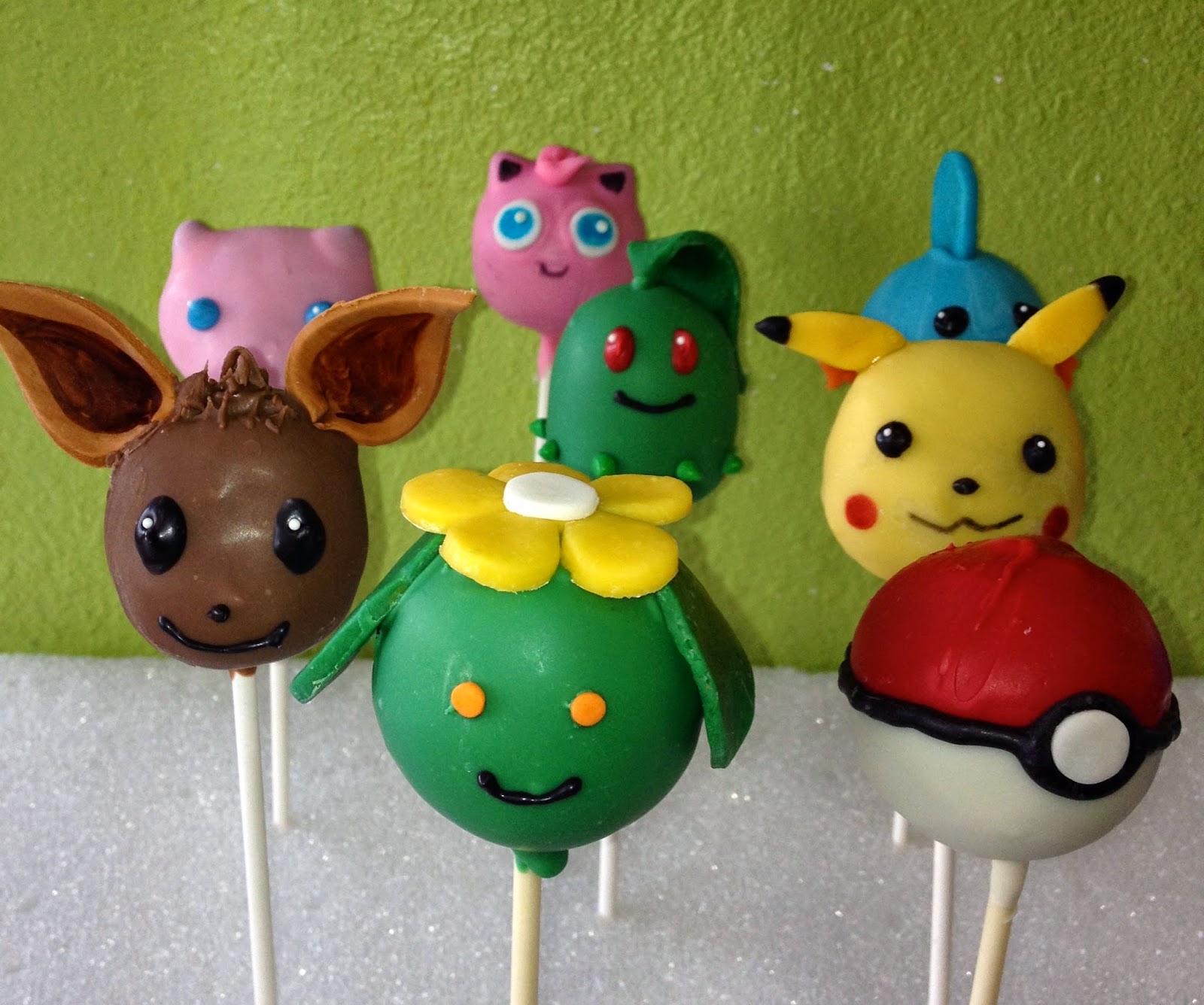 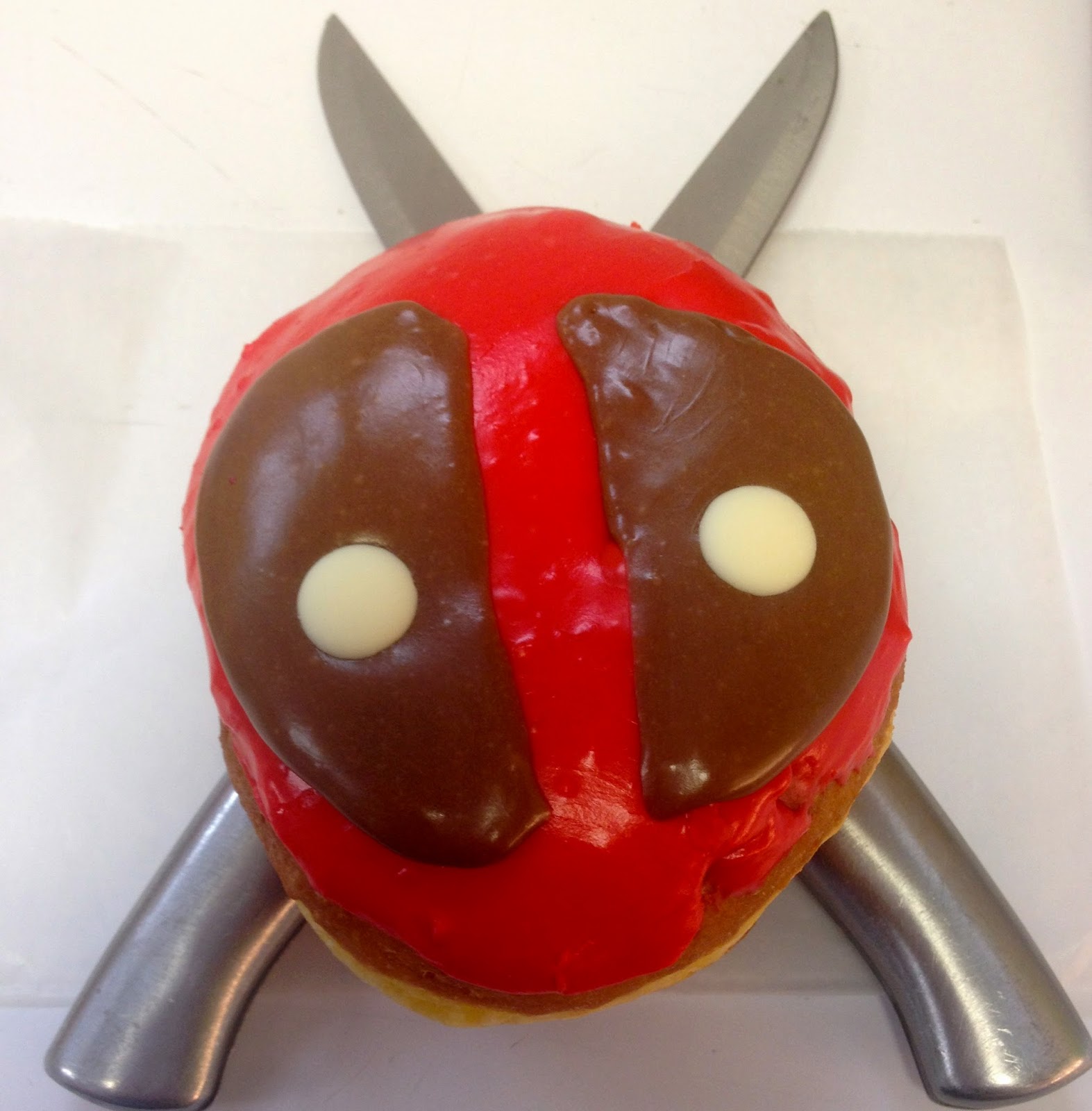 We are vibrating with manic excitement over the launch of Monster Pops, for Fanime 2014. Even the San Francisco Examiner is going wild.  What's a Monster Pop?   Early in their tumultuous lives, these infant chocolate cake monsters go through a metamorphosis – a dramatic change – which makes a caterpillar's journey seem trivial. These little monsters are thrown back into the mixer with butter cream and frosting, rolled into balls, and pierced with a popsicle stick.  It's a rough transition, and these poor creatures will never evolve into pretty butterflies.  Because at this point, they're dipped in a chocolate candy coating, and decorated as one of 16 familiar monster varieties. Special thanks to our Psycho cake decorator extraordinaire, Pam Smith, for adding her super-creative magic to the Psycho creative process. Pam is like a human 3D printer. She can turn sugar into anything, even wedding cakes. Did you know that we can make custom donut cakes?! Just sayin... 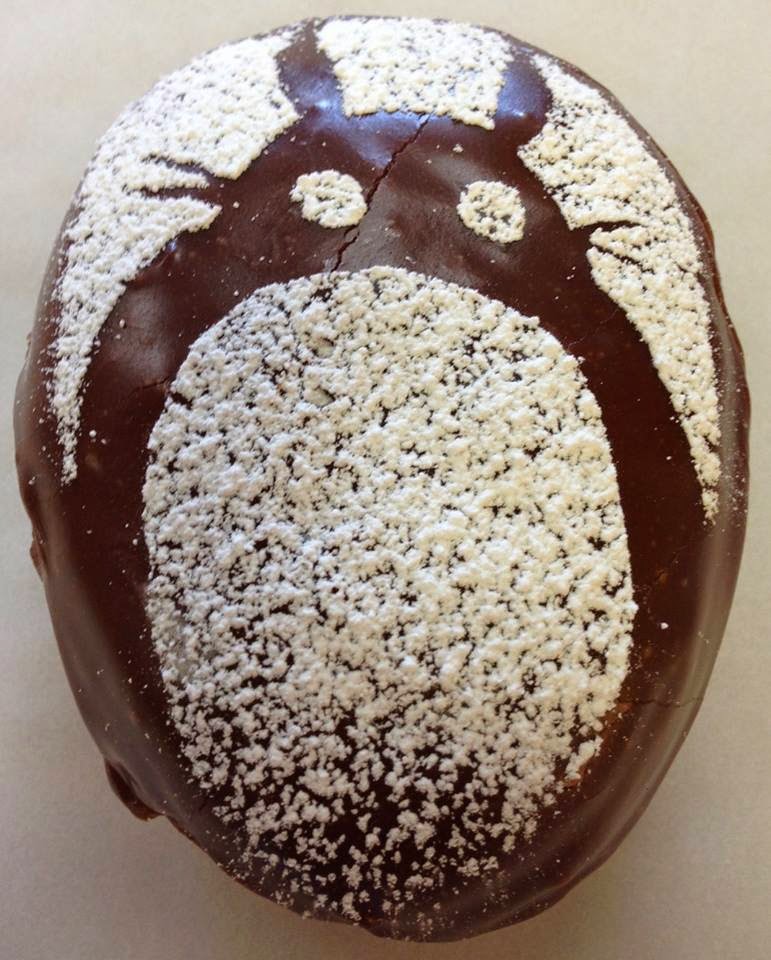 During Fanime, some of our 'traditional' donuts are also turning Japanese. Headbanger will morph into Yoshi Eggs, and our chocolate raised Jasonut becomes TotoroNut.  And then there's Deadpool...!

Watch for other crazy twists and turns during Fanime weekend, in Downtown San Jose, May 23 - 36.

And watch for our next Donut Pop announcement – which will be a much darker cousin of Monster Pops.

Forget Sunday Brunch this Mother's Day, and come to Psycho Donuts for a MOMosa.  It's a mimosa in a donut form factor.  It's turnkey!  Drinkable mimosas are so easily spilled.  And now, you 'donut' need to bother with the arduous task of mixing your champagne and orange juice.  The benefits are endless. (but wait, order now, and you'll also receive...) But what about the taste? Our MOMosa is filled with a champagne pastry cream, topped with orange icing, and a citrus rainbow swirl.  It's demented!  Hey kids, this is what your mom wants for Mother's Day... along with a little time alone in our padded cell.

The Psycho kitchen is on fire with corporate orders.  Thanks to some of our favorite customers of crazy big donut deliveries, including Apple, EBAY, Cisco, Google, Facebook, Netflix, PayPal, and many more.  Looking for some über-crazy donuts for a special company event?  Send us an email for a quote.  We can deliver Psychos to your door!

The Psycho wholesale division is kicking into high gear also.  We are giddy to announce that 3 Santa Clara University cafés have gone Psycho. Welcome to the Psycho family, SCU! 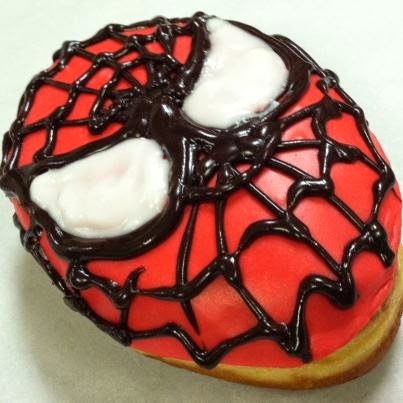 Did you miss Star Wars Day?  If so, you also missed our freshly harvested Wookiee Ballz.  Our customers were happy. But Chewbacca? Not so much... Wookiee Ballz will return next year, and May the 4th be with You!

Going to the Big Wow ComicFest?  If so, look for the Psycho booth in the main concourse of the San Jose Convention Center.  Or prove you're worthy of that super hero costume, and hoof it over to Psycho San Jose. We'll be rustling up Spiderman donuts and more!

Hope to see you at Psycho Donuts this Mother's Day!

It's almost time for Eastertrocities at Psycho Donuts.  But first... some Psycho adulations... 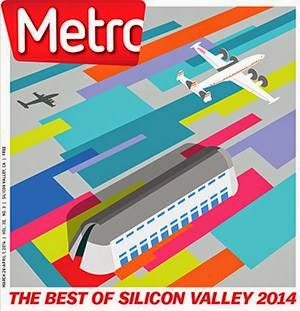 Thanks to all of our crazy fans for voting Psycho Donuts BEST DONUT SHOP – 6 years running – in The Metro's 2014 Best of Edition! Also, Big(foot) thanks to all of our Psycho artists, especially Christine Benjamin and Kepi Ghouli, for creating the Bigfoot Show, happening Saturday, April 12, at Psycho Campbell!

'Donut' miss a visit to Psycho Donuts this Easter!  Starting on Monday before Easter, get ready for Psome Pserious Psycho bunnytrocities... Available at both Psycho Donuts locations, through Easter Sunday.

Protect your nest egg! Our responsible Peeps can give you a lesson with Peep Show. You'll find our pedantic peeps perched tirelessly atop their Cadbury Easter Eggs, in their warm donuty nest - fashioned from raised donuts with maple icing and coconut. Before eating the eggs below, make sure to eat the Peep on top first - these peeps have been know to protect their nest eggs at any cost!


Sorry, no cute bunnies at Psycho Donuts... you'll have to go to Cute Donuts for those... Rabbit Roadkill has seen better days. Jelly filling is oozing from his skid-marked ear. His swollen Donut-Hole eye gives him a pretty sad outlook... and though you may feel a pang of regret, you will eat him.

Get ready, as Psycho Donuts brings back the definitive Hot Chick.   Like many hot chicks, this one has a spicy bunny tattoo on its mid-section!

Hope to see you for a Crazy Good Easter celebration at Psycho Donuts! 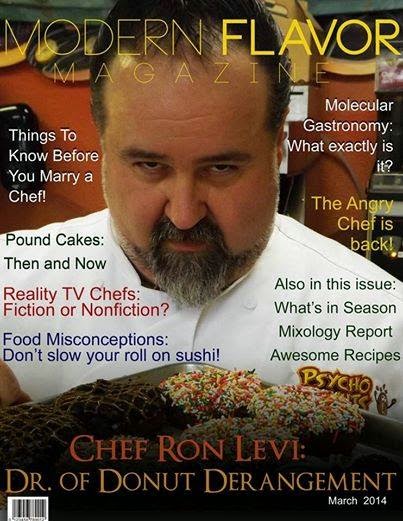 With a Psycho Psigh, we sing So Long, Farewell to our Doctor of Donut Derangement.  After inventing some of the world's most creative donutrocities, and creating world-wide donut fame for Donut Guy and himself alike, Chef Ron Levi is returning the the relatively small market segment of "non-donutary" food.   We wish Ron a crazy successful career.  He can usually be found making culinary waves at Calafia Café in Palo Alto.

Ashley is a graduate of the International Culinary Center, and joined Psycho Donuts in 2012 as a nurse trainee at Psycho San Jose.  From the day she joined, Ashley was on a mission.  In her care, customers never missed out on a bubble wrap experience and Psycho San Jose literally sparkled at the end of each shift – as she quickly became a role model of Psycho Pspirit. Needless to say, Ashley was quickly promoted to Psycho Psupervisor.  Within a year, she was again promoted to Assistant Store Manager (we really need a psycho title for our ASMs, right? Email us and win a free half dozen Psychos if we use your idea).

The nice thing about a small company is a flat hierarchy. Only 15 promotions later, Ashley was ready to kill for the top spot. There were rumors of death threats... Was Ashley to blame?  Some things remain shrouded in mystery.  We're just saying that Ashley really wanted – and deserved – the craziest job in Silicon Valley.

In between juggling schedules, payroll, staffing, vendors, inventory (and 400 things not covered in her job description), you'll find Ashley currently developing a Bigfoot Donut, something clever for National Donut Day, and even a Spam donut (more on that soon!).

Despite the never-ending attempts of Donut Guy to preempt Ashley's entire existence, she manages to maintain a thin shred of sanity (well, not really sanity) amidst the Psycho chaos.

So here's a little more about Ashley in her own words.  "...I'm having a hard time thinking of things to write about myself! Um, I'm perpetually pink with my hair and stuff? I'm a huge nerd who enjoys Star Trek, video and board games, and Sailor Moon. Um. Um. Um. I know how to tie a cherry stem with my tongue? I love musicals? I'm an avid blackjack player? I can say the alphabet backwards? I know all the presidents we've ever had, in the correct order?"

You had us at tying a cherry stem with your own tongue...!  Things do not always happen as they should when it comes to careers and companies... but occasionally, the cream rises to the top. We're Psuper proud of you, Ashley!

The Bigfoot Show at Psycho Donuts 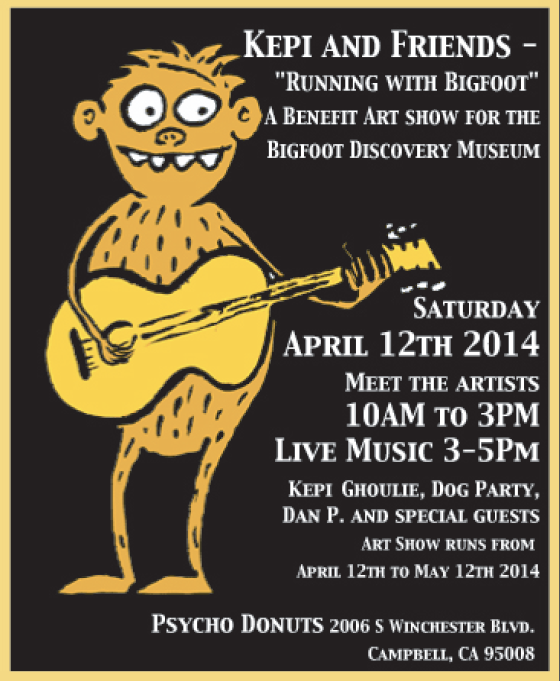 Kepi Ghoulie, Art friends and Psycho Donuts, in conjunction with the Bigfoot Museum, are planning a special Bigfoot-themed event to raise money for the Bigfoot Museum in Felton CA! Original art, live
music, and crazy donut prescriptions will be your reward for attending.  Plus it's the ONLY day you'll be able to buy Bigfoot's Toe Jam (a portion of Toe Jam proceeds will directly benefit The Bigfoot Museum).  Who needs a bear claw when you can eat Bigfoot?  Here's what Jerry Salas at SanJose.com had to say about The Bigfoot Event.

'Donut' miss our special art reception where Psycho customers can meet the artists, and hear live performances of Kepi Ghoulie (of Groovie Ghoulies fame) Dog Party, Dan P., and special guests – live from the Psycho Padded Cell.   The art show will continue at Psycho Campbell through May 12, 2014.  RSVP on our Facebook Event, or just show up!

Psycho Donuts Campbell is giddy to announce the list of artists participating in the Bigfoot show:

A portion of proceeds from Bigfoot donut sales and art sales will directly benefit The Bigfoot Museum.  Special thanks to Christine Benjamin and Kepi Ghoulie!